I have to admit that I’ve been slow to take an interest in remote shooting and to some extent I think that without my podcasts it may not have happened at all. As you may have read in previous blogs, until recently my remote shoots were limited to one very early on in the Coronavirus pandemic and one recently. Both were with Elle J and both with a view to discussing them afterwards on a podcast and that was it really until I came across what I would describe as a remote shoot with a difference.

Quite out of the blue I came across a casting by Amie Boulton, who I have worked with before. This was for a remote shoot based at Trident Studio Plymouth. Trident Studio is owned by Chris Conway and Chris is on hand to assist on these remote shoots. So what got my interest?

The main thing was that the shoot was themed and heavily involved make-up and in this instance the make-up was in the capable hands of Joanne Bates (Beauty Within). The shoot itself had two themes across the day. The Broken Doll in the morning 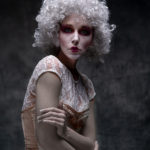 and Opulent Beauty in the afternoon. 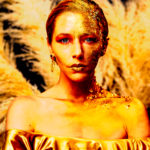 I saw this as an opportunity to work with a first class team and get two sets of very different images in the day. The other plus for me was that the shoots were made available at a very affordable price as they were short sessions. Fifteen minutes you may think is not a lot of time and I thought the same but in fact I found it plenty of time and came away with some very good images from the day. Yes, you do have to be available at two different times of the day but I think it is worth it given the end results.

I don’t know if this type of remote shoot is unique but it is certainly offering something a little different and offered an opportunity that in this instance I felt was better suited to remote shooting than a “live” studio day.

I don’t think it can be denied that remote shoots have filled a void very well over the last 12 months. Nothing will suit everyone and so there have been a wide range of opinions on remote shoots and, as I have said before, they have not really been for me. However, as time goes and new ideas continue to be introduced into remote shooting I can see that they will go on to appeal to a wider audience.

More images from the day (click to enlarge image)